NO PEACE HERE IN SPITE OF CHRISTMAS SEASON 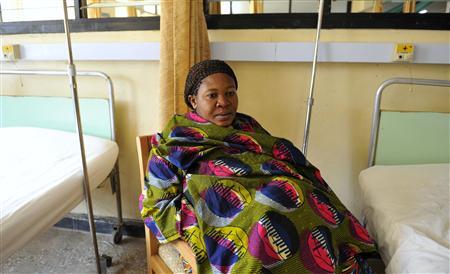 1 of 4. Chinyere Amechi, who is five-months pregnant and a victim of the Christmas day bombing of a church near Nigeria’s capital Abuja, recovers in a hospital in Abuja December 27, 2011.
Relious wars are without doubt among the deadliest conflicts of mankind.
Here, after Christmas 2011 is the report from Africa about pending Muslim – Christian warfare. What happens there, now, very possibly is a warning about our future here in America.  Not necessarily Muslim – Christian conflict, but possibly Christian – Christian, Christian – Secular, or some other combination.

We, here, are not immune to such conflicts.  In our history, we lost more Americans in the Civil War than in all the other wars in US history combined. Not only pray this will not become our future history, but work toward that end as well. Being Christian also means we live fully in the world around us as we live out our Christianity.
Fr. Orthohippo    December 28, 2011 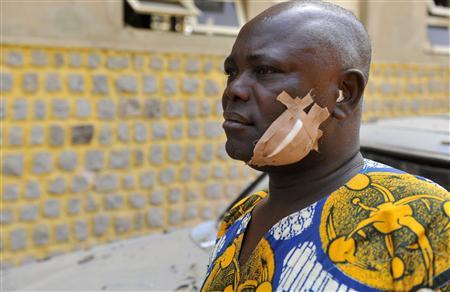 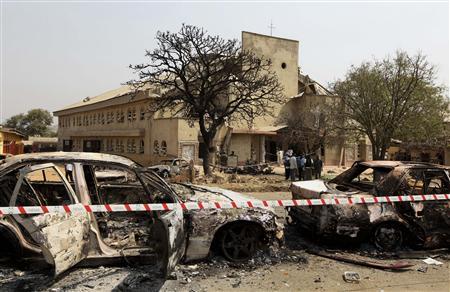 By Tim Cocks and Felix Onuah

ABUJA (Reuters) – Northern Nigerian Christians said on Tuesday they feared that a spate of Christmas Day bombings by Islamist militants that killed over two dozen people could lead to a religious war in Africa’s most populous country.

The warning was made in a statement by the northern branch of the Christian Association of Nigeria (CAN), an umbrella organization comprising various denominations including Catholics, Protestant and Pentecostal churches.

But a powerful Muslim traditional ruler, the Sultan of Sokoto Muhammadu Sa’ad Abubakar said after meeting the Nigerian president in Abuja on Tuesday that it was not a conflict between Muslims and Christians or between Islam and Christianity.

The Boko Haram Islamist sect, which aims to impose sharia Islamic law across Nigeria, claimed responsibility for the blasts, the second Christmas in a row it has caused carnage at Christian churches.

Saidu Dogo, secretary general for the CAN in Nigeria’s 19 northern provinces called on Muslim leaders to control their faithful, saying Christians will be forced to defend themselves against further attacks.

“We fear that the situation may degenerate to a religious war and Nigeria may not be able to survive one. Once again, ‘enough is enough!’,” Dogo said.

The attacks risk reviving tit-for-tat sectarian violence between the mostly Muslim north and the largely Christian south, which has claimed thousands of lives in the past decade.

Dogo said the CAN was calling on all Christians to continue respecting the law but to defend themselves when needed.

“We shall henceforth in the midst of these provocations and wanton destruction of innocent lives and property be compelled to make our own efforts and arrangements to protect the lives of innocent Christians and peace-loving citizens of this country,” Dogo said.

The most deadly attack killed at least 27 people in the St Theresa Catholic church in Madalla, a town on the edge of the capital Abuja, and devastated surrounding buildings and cars as faithful poured out of the church after Christmas mass.

“What is going on is a conflict between evil people and good people,” Sultan Abubakar said after the meeting at the presidential residence. “The good people are more than the evil ones. So the good people must come together to defeat the evil ones and that is the message.”

“We want to assure our brother Christians and Christian leaders to stand on the part of truth according to our religion and continue to work for the greatness of this country,” the Sultan said.

Security forces also blamed Boko Haram for two explosions in the north targeting their facilities. Officials have confirmed 32 people died in the wave of attacks across Nigeria, though local media have put the number higher.

But the church bombs are more worrying because they raise fears that Boko Haram is trying to ignite a sectarian civil war in the nearly 160 million nation split evenly between Christians and Muslims, who for the most part co-exist in peace.

Nigerian President Goodluck Jonathan has come under pressure to do more to fight the growing security threat which risks derailing economic gains in the OPEC member and Africa’s top oil-producing nation.

Nigeria’s main opposition leader Muhammadu Buhari, a northerner and former military ruler who lost a presidential election in April to Jonathan, accused the government of incompetence on Monday, saying government was slow to respond and had shown indifference to the bombings.

The CAN said in the statement that it was concerned that the perpetrators and their sponsors “are well-known to government and no serious or decisive actions have been taken to stem their nefarious activities.”