ANIMALS SINGING THE GLORY OF GOD?

In the King James version of the Psalms, the psalmist speaks of the “coneys” and how they too praise God. The translators back in 1611 tried to find an equivalent for whatever the Hebrew word for “hyrax” is and came up with “coney,” which is a variation of the lupine (rabbit/hare) family. Turns out the psalmist knew what he was talking about because the “rock hyrax” or as unlovely modern translations write it, “the rock badger” actually can sing!! Ah, all Creation rejoices in Thee!! And the coneys sing too!!! Reid Nelson Wightman

The rock hyrax doesn’t look like much, but it just joined an elite group of animals who display the rudiments of language. The lengthy songs these social mammals sing to each other show evidence of syntax and even regional dialects.

Hyraxes are native to Africa and the Middle East, and a recent study of the creatures in Israel turned up evidence that the way they order the notes in their song actually matters, meaning they use syntax in their communications. According to head researcher Arik Kerschenbaum of Israel’s University of Haifa, this is an incredibly rare find to make, making hyraxes an unlikely addition to a list of communicators that includes primates, cetaceans, birds, and bats. Speaking to BBC News, Dr. Kerschenbaum explains how the songs work:

“A typical hyrax song can last for several minutes, and their songs are broken down into small bouts, with each bout lasting for maybe 10 to 20 seconds. Each bout is composed of a number of notes, which we call the syllables. There are only a very small number of syllables that make up a hyrax song, and each sound is very distinct. And out of these, you can make up a whole language and combine them in an infinite number of ways. We found that there is some significance to the order they composed their songs – the order of the notes within their song – and that is a syntax, the way the different elements are combined to make a whole.”

The basic “units” of the hyrax songs include “wails, chucks, snorts, squeaks, and tweets”, and mathematical analysis revealed that these were ordered in non-random ways, indicating the use of syntax. What’s more, there were noticeable, consistent differences from one population of hyraxes to the next, suggesting the presence of local “dialects.” These were likely the result of the hyraxes copying each other in the various localities, which would feed the creation of distinct regional sounds. The differences between hyrax populations were roughly comparable to those between British English and American English. 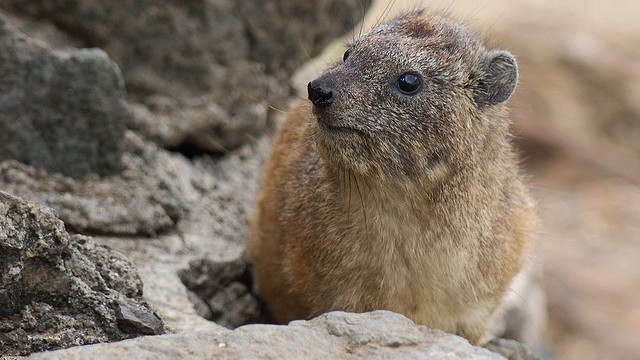 Typically, animals develop such complex language skills for one of a couple reasons: either they’re intelligent, they are extremely social animals, or both. In this instance, it’s likely that the hyraxes are just very social, and have developed these skills as a result of living in such gigantic colonies. Indeed, as Dr. Kerschenbaum explains, the hyraxes probably aren’t actually saying much with their songs, at least not in the way we would understand it:

We think they are not encoding any information in this syntax. We think the hyrax song is more similar to bird song. It is a form of advertising: the males want to sing more complex songs to show the females that they are fitter, more capable of a greater diversity of vocalisations. The young males are copying the dominant male, and trying to sing like he is singing, which is why you get the similarity existing in the same group.”

Via BBC News. Image by Dave 2x on Flickr.

The blog of a retired Anglican priest (MSJ), his musings, journey, humor, wonderment, and comments on today's scene.
View all posts by Fr. Orthohippo →
This entry was posted in Biblical Translation, Uncategorized and tagged Bible translation, coney, hyrax. Bookmark the permalink.