WONDER HOW ORTHODOXY MAY BECOME HERESY? THESE EPISCOPALIANS FIND OUT FIRST HAND.

How a church can sink. If  you have wondered how Scripture and Christianity can be reinterpreted to something distinctly different, here is one way. The Episcopal Church in Virginia recommends that Christians see this “new updated gospel” replacing the old outdated orthodoxy. A former Roman Catholic priest delivers some of those details to Episcopalians with the blessiings of their hierarchy. 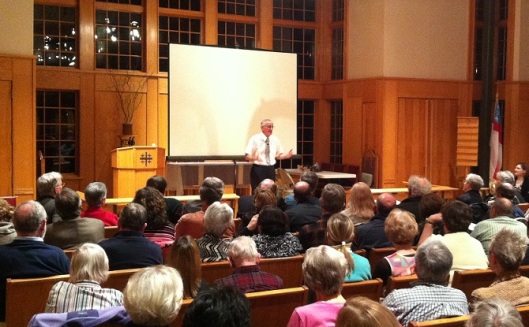 Resurrection “can’t just be about Jesus,” and has to do with dying to Roman culture, according to former Jesus Seminar President Dominic Crossan at a recent lecture held at Holy Cross Episcopal Church in suburban Washington, D.C. (photo: Jeff Walton / IRD)

Just in time for Easter, Virginia Episcopalians hosted a Jesus Seminar radical who denies that Jesus was uniquely divine or physically rose from the dead.

Instead, the historic person of Jesus was a non-violent revolutionary who was distinct only for the time and place in which he lived, according to an author and former Roman Catholic priest who recently lectured, preached, and led a dialog with clergy of the Episcopal Diocese of Virginia hosted by Bishop Shannon Johnston.

In appearances timed for Lent at Episcopal Church of the Holy Cross in Dunn Loring, Virginia March 10-11, former Jesus Seminar president John Dominic Crossan spoke on “The Last Week of Jesus” in which he argued against orthodox teachings about the Resurrection, the afterlife, and the nature of the Kingdom of God.

Crossan’s unorthodox views on the Resurrection are already well-established in his writings and the Jesus Seminar, a once prominent body of liberal scholars who used to gain headlines by disputing the Gospels’ historicity.  But the hosting, promotion and what amounted to an effective endorsement of his teachings – with a glowing introduction by Holy Cross Rector Wes Smedley – reveal an Episcopal diocese that drifting ever further from orthodoxy. Crossan’s appearance was promoted by the Episcopal Diocese and other Episcopal congregations in Northern Virginia, including the “renewing” congregations of The Falls Church (Episcopal) and Epiphany Episcopal Church.

“The most important thing for me is to ask the right questions,” Crossan shared in a sanctuary filled at near-capacity. Centering his Sunday evening talk on differences in iconography between Eastern and Western portrayals of the Resurrection, Crossan displayed Western church images of an individually Resurrected of Christ alongside an entire crowd being liberated from Hades in the East.

The differences, Crossan asserted, raised “huge” doctrinal problems about baptism and “the East, I think, has a better sense that doctrine doesn’t capture God – the best we can do is get glimpses, and sometimes wrong glimpses.”

Arguing that the first century idea of Resurrection was significantly different than now, Crossan charged that scripture up to the book of Daniel took for granted that there was no afterlife. Claiming that afterlife was dismissed as a “typical pagan impertinence” by Jews familiar with the concept from surrounding cultures, the idea of an afterlife, Crossan asserted, was folded into Jewish belief during religious persecutions perpetrated by Syrians.

“Where is the justice of God when looking at the bodies of martyrs?” Crossan asked. The answer of some Jews was that there must be a great public vindication of the martyrs when God “cleans up the mess of the world.” Crossan jokingly referred to this eschatology as “Extreme Makeover: Cosmic Edition.”

Crossan stated that he would not attempt to dissuade a person from belief in the afterlife. But “if you’ve spent your whole life with Christ, why should it [afterlife] matter?” The retired professor from Chicago’s DePaul University recounted a conversation in which Sojourners President Jim Wallis defended the physical resurrection of Christ by explaining “no one dies for a metaphor,” and Crossan retorted “that’s the only thing they die for.”

1 Response to WONDER HOW ORTHODOXY MAY BECOME HERESY? THESE EPISCOPALIANS FIND OUT FIRST HAND.