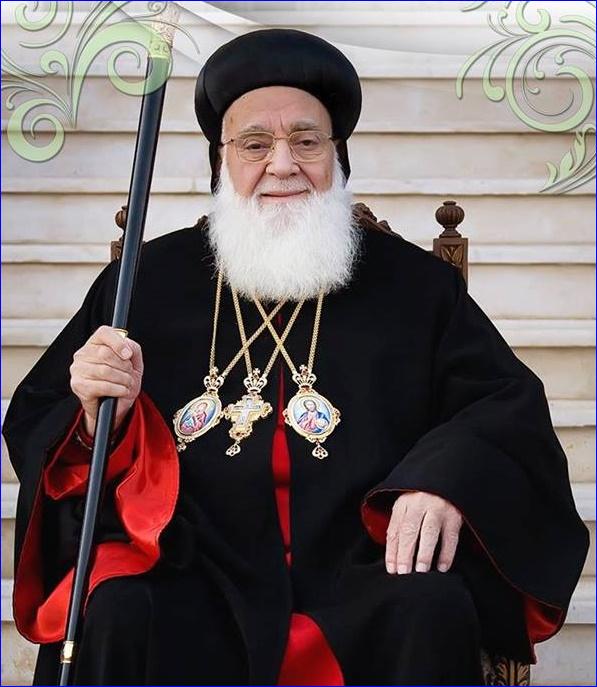 Germany (AINA) — His Holiness Ignatius Zakka I Iwas, Patriarch of the Assyrian Orthodox Church, died Friday morning from a heart attack in a hospital in the city of Kiel in Germany.
He was 81 years old and the 122nd patriarch of what is considered to be the oldest church in the world, with a following of some four million across the globe.

He was born on April 21, in Nineveh, Iraq (today’s Mosul) during the fateful year of 1933 when Iraqi forces massacred some three thousand Assyrians in what is known as the Simmele massacre. His parents gave him the name of Sanharib after the ancient Assyrian king. On November 17, 1957, he was ordained as a priest. On On November 17, 1963, he was ordained as Metropolitan Bishop of Mosul.

Bishop Sanharib adopted the name Ignatius when in 1980 he was chosen to lead the church after the death of Patriarch Yaqub III.

The general secretariat of the Holy Syrian Orthodox Church of Antioch issued a statement saying:

“In this time of mourning and grief, the general secretariat of the Holy Synod declares that the time of the funeral will be appointed later when the procedures of transfer of his saintly body from Germany to Lebanon and then to Syria, are completed. We commend that this coming Sunday, 23 March 2014, be consecrated to offer prayers and celebrate the Divine Liturgy for the peaceful rest of his pure soul and we will announce the procedures and dates of the funeral, burial and condolences when ready.”

His tenure was characterized by a minimalist approach to church administration and the church has been in a steady decline since his take over. He was unable to resist pressure from the Syrian Arab Baath regime, which has infiltrated the church to a degree that Arabic has almost become the preferred language of the church instead of Assyrian (also known as Syriac or neo-Aramaic). He was also heavily criticized by Assyrian groups for issuing statements praising Arabism.

His death marks the beginning of a process in which different interests vie for the now vacant position. Turkey has worked openly to bring the seat of the patriarchate back to Turkey while Syria has been fiercely against such a move. Both states see the church as an asset and a tool to control a large section of the Assyrian people. Many observers believe that Turkey and Syria will work to have one of the bishops aligned with them to become the new patriarch.