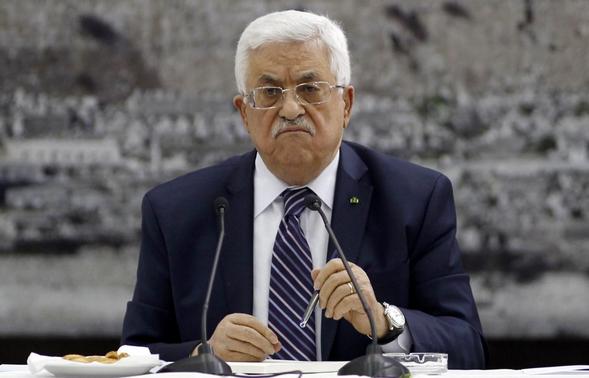 1 of 3. Palestinian President Mahmoud Abbas attends a meeting with Palestinian leaders in the West Bank city of Ramallah in this April 1, 2014 file picture.

The negotiations had appeared to be heading nowhere even before Wednesday’s reconciliation agreement between the Palestinian groups plunged them deeper into crisis. The United States had been struggling to extend the talks beyond an original April 29 deadline for a peace accord.

“The government of Israel will not hold negotiations with a Palestinian government that is backed by Hamas, a terror organization that calls for Israel’s destruction,” an official statement said after a six-hour meeting of the security cabinet.

Asked to clarify whether that meant the talks were now frozen or would be called off only after a unity government was formed, a senior Israeli official said: “They are currently suspended.”

In Washington, a U.S. official said the United States would have to reconsider its assistance to Abbas’s aid-dependent Palestinian Authority if the Western-backed leader and Hamas formed a government.

U.S. Secretary of State John Kerry spoke by telephone with Abbas on Thursday and expressed his disappointment at the reconciliation announcement.

Kerry stressed that any Palestinian government must abide by the principles of nonviolence, recognition of the state of Israel, and acceptance of previous agreements and obligations, State Department spokeswoman Jen Psaki said.

Kerry, who has shuttled repeatedly to the Middle East to push peace efforts, said he was not giving up hope.

“There’s always a way forward, but the leaders have to make the compromises necessary to do that,” he told reporters.

“We will never give up our hope or our commitment for the possibilities of peace. We believe it is the only way to go. But right now, obviously, it’s at a very difficult point and the leaders themselves have to make decisions. It’s up to them.”

U.N. Middle East envoy Robert Serry offered support for the Palestinian agreement after meeting Abbas on Thursday, saying in a statement it was “the only way to reunite the West Bank and Gaza under one legitimate Palestinian Authority”.

The deal envisions a unity government within five weeks and elections six months later. Palestinian divisions widened after Hamas, which won the last general ballot in 2006, seized the Gaza Strip from forces loyal to Abbas in 2007.

‘DOOR WAS NOT CLOSED’

In an interview with MSNBC after the security cabinet meeting, Israeli Prime Minister Benjamin Netanyahu appeared to leave open a window………….

The blog of a retired Anglican priest (MSJ), his musings, journey, humor, wonderment, and comments on today's scene.
View all posts by Fr. Orthohippo →
This entry was posted in Islam, Israel, Uncategorized and tagged Islam, Israel, politics, Uncategorized. Bookmark the permalink.