No matter your thoughts about the freedom, accuracy, and slants of news media, here is what Chinese in the south of China had to read on August 30, 2014 as published by The South China Post.

Beijing warns it will not tolerate ‘foreign meddling’ in city’s election
Journalists raise hands to ask questions in a discussion of deputies to the 12th National People’s Congress in Beijing. Photo: Xinhua

China today ordered its journalists to learn “Marxist news values” and uphold the principles of news as prescribed by the ruling Communist Party – the latest step in President Xi Jinping’s crackdown on the media.

The guidelines by the All China Journalists’ Association, published by state news agency Xinhua, are aimed at both traditional and online media.

The guidelines are another sign of Xi’s politically conservative agenda.

“Let us hold high the banner of socialist core values,” the report said, using the party’s term for orthodox beliefs.

Xi has espoused old school Maoism as he seeks to court powerful conservative elements in the party. Like many officials before him, Xi is steeped in the party’s long-held belief that loosening control too quickly or even at all could lead to chaos and the break up of the country.

In July, the State Administration of Press, Publication, Radio, Film and Television said the government would toughen curbs on journalists disclosing state and commercial secrets.

Early this year, Chinese journalists also had to pass a new ideology exam to keep their press cards. They were required to do a minimum 18 hours of training on topics including Marxist news values and Socialism with Chinese Characteristics. 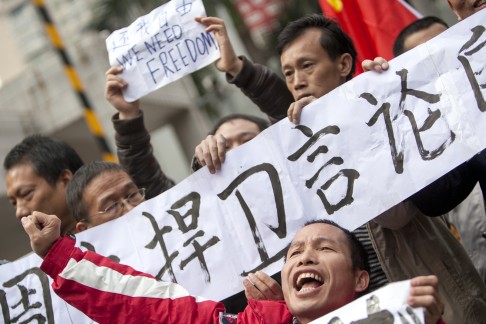 Some reporters and academics trace the start of the tougher attitude on media to a strike in January 2013 by journalists at the outspoken Southern Weekly newspaper. Photo: NYT

It was the first time reporters have been required to take such a test en masse, state media said.

The exam would be based on a 700-page manual being sold in bookshops. The manual is peppered with directives such as “it is absolutely not permitted for published reports to feature any comments that go against the party line” and “the relationship between the party and the news media is one of leader and the led”.

Chinese state media has traditionally been the main vehicle for party propaganda. Reforms over the past decade that have allowed greater media commercialisation and limited increases in editorial independence – which, combined with the rise of social media, have loosened the party’s grip slightly, academics said.

China media watchers point to a flurry of editorials after Xi spoke to propaganda officials in August as evidence of concern within the party that control over public discourse was slipping.

The official Beijing Daily described the party’s struggle to win hearts and minds as a “fight to the death”.

Some reporters and academics, however, trace the start of the tougher attitude on media to a strike lasting several days in January 2013 by journalists at an outspoken newspaper, the Southern Weekly, after censors scrapped a New Year editorial calling for China to enshrine constitutional rights. Xi had taken over the Communist Party only several weeks earlier.

The strike ended after local propaganda officials promised to take a lighter hand with censorship.

In August last year, the Communist Party’s Propaganda Department announced the rule that the nation’s more than 300,000 reporters, producers and editors would soon have to sit through at least two days of Marxism classes, to promote “ideological unity”, the Post reported.

Journalists reacted with apathy to the announcement at the time. “I’ve studied Marxism for so many years, the more I study it, the less I understand it,” one Beijing-based journalist said.