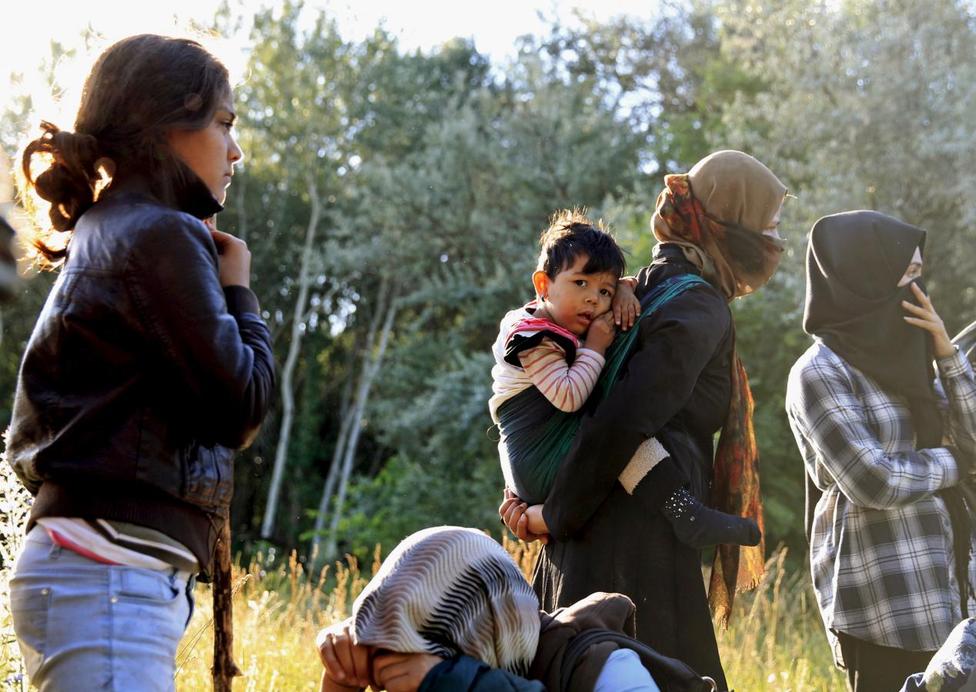 A group of Afghans rest after crossing the Hungarian-Serbian border illegally near the village of Asotthalom, Hungary, June 18, 2015.
Reuters/Bernadett Szabo

If anyone has benefited from Syria’s internecine war it’s the men selling bikes in the village of Demir Kapija on Macedonia’s southern border with Greece.

Forbidden from using public transport in Macedonia, thousands of migrants, most of them Syrians, have taken to two wheels to cross this landlocked republic en route to Serbia, then Hungary and Europe’s borderless Schengen zone.

Hungary says almost 60,000 have entered illegally so far this year, and on Wednesday announced it would throw up a 4-metre high fence along its 175-km (110 miles) border with non-European Union member Serbia.

The move will inevitably evoke memories of the Cold War-era barriers – including the Berlin Wall – that separated communist eastern Europe, including Hungary, from the capitalist west.

Migration experts warn it also risks creating a dangerous logjam in Serbia, an impoverished ex-Yugoslav republic woefully ill-equipped to deal with the influx.

“It’s going to create a bottleneck,” said Rados Djurovic, director of the Belgrade-based Asylum Protection Centre. “Serbia does not have the capacity to deal with this.”

In Macedonia, lawmakers on Thursday moved to grant migrants legal passage for 72 hours. The step is designed to prevent them from being preyed on by violent trafficking rings and to dissuade them from risking their lives by walking the railway line or cycling along the highway.

But it means they will reach Serbia even faster.

“This is going to create a huge humanitarian challenge for Serbia,” said Djurovic.

The past two years have seen a dramatic rise in the number of migrants choosing the Balkan route through Turkey, Greece, the former Yugoslavia and into Hungary to reach wealthier Western Europe, swelled by refugees from Syria fleeing four years of war.

Record numbers of migrants are also drowning in the Mediterranean having left North Africa by boat.

Djurovic said the Hungarian fence was unlikely to stem the tide through Serbia, given that alternative routes through the likes of Romania and Bulgaria or west through Bosnia and Croatia were far longer and fraught with obstacles.

“The price of smuggling will only get higher. The migrants won’t disappear; they have sold everything for this. A river will always find a way.”

Reuters reporters on Macedonia’s border with Greece saw hundreds of migrants walking through fields to cross the frontier under the helpless gaze of police.

Previously they have followed the railway line that runs to Serbia, a route that claimed the lives of 14 in April, struck by a train in a tight ravine.

Now they can be seen in groups of several dozen cycling along the highway on bikes bought at two thriving shops in Demir Kapija.

“It’s the only way; I want to get to freedom,” said a 25-year-old Syrian man who gave his name as Anas and said he paid 125 euros for a bike to continue his journey to Denmark.

Macedonia lacks the beds or money to house them. Parliament on Thursday voted to change the law to offer them legal documents for 72 hours to cover their passage through the country.

Interior Minister Mitko Cavkov accused Greece of “turning a blind eye” to the migrants crossing its northern border into Macedonia. “We know they are here because of a terrible fate and that’s why we must do everything in our power to help them,” he told the chamber.

A Macedonian police patrol on the highway on Wednesday looked on as migrants cycled past on the hard shoulder. “What can we do?” said one officer, who declined to give his name.

“We know it’s illegal and dangerous,” he said. “But if we stop them we have to take them with us. Where?”

Hungary, where the government of Prime Minister Viktor Orban has clashed with EU peers over its handling of immigration, defended its plan for a “security fence” on Thursday.

“We hope there will be a common EU response to handle the pressure from immigration, but at the moment it seems distant,” said Foreign Minister Peter Szijjarto.

Serbian Prime Minister Aleksandar Vucic said on Wednesday he was “very surprised” by the announcement.

A spokeswoman for the European Commission, the EU’s executive arm, said it was up to member states to decide how to manage their border, but told a news conference: “We have only recently taken down walls in Europe; we should not be putting them up.”

“Instead of building walls between countries to stop us from coming, they should try and stop the war in Syria. If there’s no war, no Syrians will leave.”

The blog of a retired Anglican priest (MSJ), his musings, journey, humor, wonderment, and comments on today's scene.
View all posts by Fr. Orthohippo →
This entry was posted in refugee border crossings, wall against refugees and tagged Europe, Hungary, migrant refugees, Schengen zone, SErbia, wall against refugees. Bookmark the permalink.